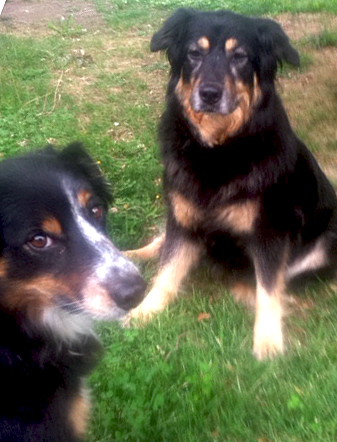 Yesterday, while sorting through (and discarding) old files, I found Meesha’s Humane Society adoption papers. They were dated March 6, 1999, her temporary name was “Murphy” and she was an estimated 6 months old. Even back then, she was deliberate and well-organized–both qualities that I lack. We have complimented each-other well during the years.

Today, she moves slowly, each step measured by its need. There are the medications of canine old age–Rimadyl and tramadol–to control pain and ensure sound sleep. But each morning she’s there to greet me with a hearty tail-wag. And when I return from work, she admonishes me for my absence. Every day, every moment are treasures for us both. She views Diesel as a nice, though somewhat addled, buffoon. I am more her staff than her owner. In Meesha’s mind (and mine) there has always been the question of who owns who.

Meesha often has the upper hand. She is, for example, quite clear about when it is time to go to bed. This applies not just to her, but to me as well. (Diesel is a lost cause in this respect. He would chase frisbees all night if he could and she has simply given up the hope of ever getting him organized.) The nightly routine begins almost on the dot of 9 PM with a demand for her evening pills which she thinks of as treats because they are concealed in cheese. (This is perhaps the only instance of my out-witting her.) There is a different, squeaky noise that says “I need to go out.” By 10 PM the squeaks have changed into louder squeaks and mutterings — a demand to turn out the lights and Go To Bed. This rarely actually happens until after 11, but in Meesha there is always optimism that her staff will learn new habits.

And in her persistent optimism, there’s something to be learned. Persistent optimism is perhaps our best path to motivate change, both on small scales and large. I really DO go to bed earlier than I would without the squeaks and mutterings from the vicinity of the dog bed. Maybe some day I’ll experiment with going to bed by 10. Or 9. And this applies to bigger scales as well. We have seen it in the past-perhaps best exemplified by the Civil Rights movement of the 60’s and especially Martin Luther King. (I Have a Dream comes to mind.) (I am pretty sure Meesha could envision herself on the podium at the Lincoln Memorial addressing the throng, too.)

What we seem to lack today is a Meesha with the vision and the correct squeaks and mutterings to move us toward an optimistic future. One in which rising temperatures, rising seas, rising floods, and rising poverty recede. This is far more complex a task than getting me to bed before 10 PM. To expect one unifying voice is perhaps too much to ask. But we can listen to, and become, small voices. Meesha is willing to provide lessons to anyone who’s interested.